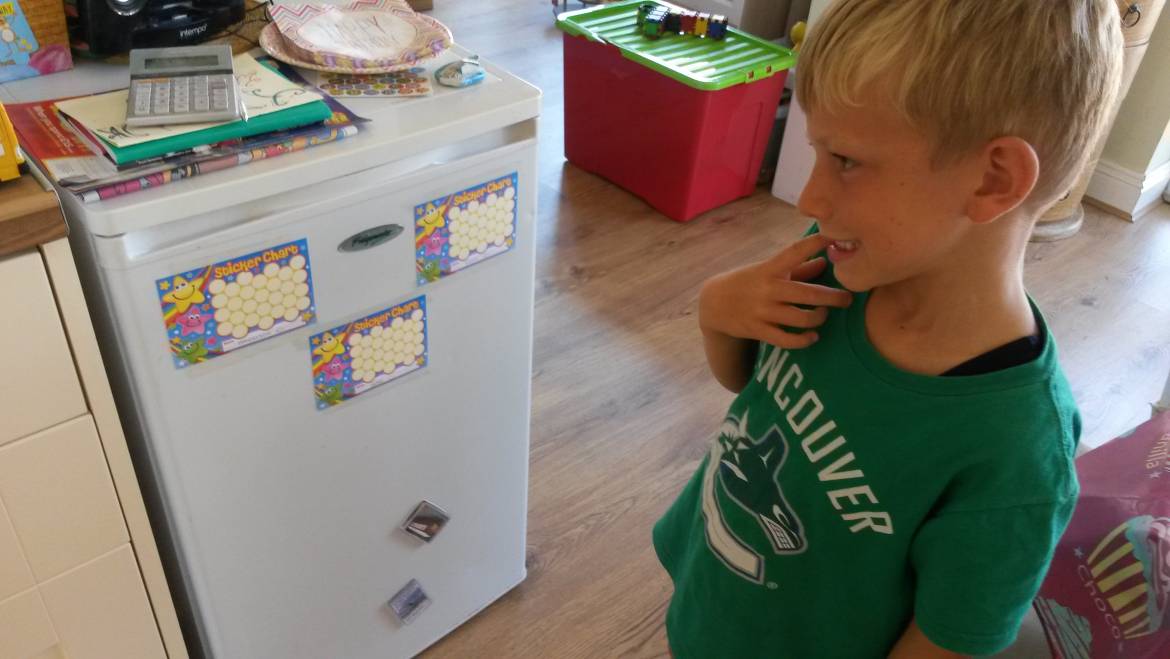 The budding young gymnasts in our classes love to receive stickers for their achievements so when we were asked by Brainwaves to review some of their Brainwaves stickers and charts we we thrilled at the idea.

When the package arrived in the post my own children were the first to see them, my sons are 4, 7 and 9 years old and love reward stickers! My initial response to their requests for the stickers was initially “no! these are for the gym club”. However on seeing how keen they were I had a re-think and came up with an idea inspired by my sister and her children.

My sister had been awarding her children buttons for any jobs that they had done without being asked, she had suggested that this would be a good thing for me to do whilst my husband was going away with work. Her children had loved the concept and been extremely helpful. I took this idea and placed each of the boys a chart on the fridge with their name written in the space provided;

Rules were then debated and this is what we agreed;

The results were immediate one of my sons is fastidious in his approach to life, he is naturally tidy and meticulous. He was quick on the case desperate to get his first sticker – going about the task with planned precision. My other son on the other hand moves through life leaving what looks like a hurricane behind him. His clothes fall about him on the floor exactly where he was at the time they needed removing and jobs are something other people do without him noticing! However my washing was miraculously taken off the line, the table was laid without a hint of it needing to be done. My youngest was creative in keeping up with his brothers pulling out a stool to help with the washing line and inventing jobs like putting the toothpaste on the brushes at 3pm in the afternoon.

It was lovely to see and whilst my husband was away on business it was a fantastic tool to use to have some extra help. I was thrilled at the motivation it had given them and it made me realise that they are capable of helping more than I had ever thought to ask.

One of my closet friends also has three boys and she was intrigued with what we were doing and joined in. I gave her 3 charts and a couple of pages of the reward stickers and her boys got stuck in using the same rules; 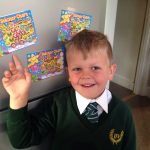 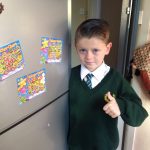 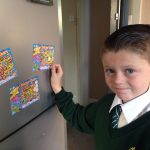 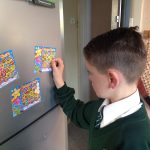 They loved the charts but did have some feedback about the stickers I had selected; “We would like to see more stickers suitable for older kids – football ones please!”

I would agree with them on this point – I was extremely surprised with how much the older children enjoyed the activity and liked putting their stickers onto the charts. However the whole chart and the stickers that we had chosen were geared more for younger children and I think this is something that Brainwaves could branch out into. My friend has since kept up with the charts and will now become a regular customer!

Next was onto the real task; see what the gymnasts think about the stickers and charts. I started out by giving out the stickers at the end of class to all of the children. Here are a few pictures; 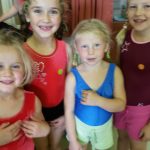 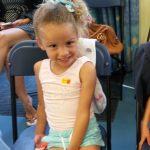 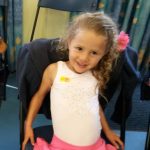 The younger children usually receive a hand stamp at the end of class and so the change to a sticker was warmly welcomed. The stickers are bright and have motivating words splashed all over them. The feedback was great and the children were really happy when they were brought out the following week.

I asked the parents what they thought about the stickers and the responses were great:

I also gave out random stickers for things that I saw gymnasts do that I felt was deserving;

This was for the slightly older children and I hadn’t decided on these set things until I saw the children doing one of these things. The children responded well and it was good for encouraging good behavior from all of the children. I think I did start off a little to generous though and so the second time I did this I was a bit less generous in giving out the stickers.

The charts were put into use with the children that I see first thing in the mornings, I really enjoy these classes as the children are fresh and keen to work really hard. We set a routine of body conditioning exercises and the children then knew what was expected for the stickers. The ideas for the exercises were a combination of their ideas and mine, I encouraged the children to think about their whole bodies and not just focus on one body part. The exercises included things like press-ups and burpees. It was agreed that once their sticker chart was filled up we would have fun session using the parachute.

The children were excellent at this and I noticed a great deal of independence being displayed. When we do body conditioning there is a lot of repetition and it is probably one of the least fun activities at gymnastics. With the motivation of receiving the stickers I was astounded at how hard they worked and how they stuck to the task. Over the course of the five weeks that we filled in the charts I was able to leave them to the activity so that it became a station that didn’t have any coach help. This enabled myself and the other coaches to work on other skills which was invaluable.  At the end of the five weeks we had a great session using the parachute this was a real treat as it is only really used for special occasions like Christmas.

The children that used the charts and reward stickers for the body conditioning also said that they would have liked a wider choice of stickers. However Brianwaves do have a huge selection of reward stickers and I should have thought a lot more about the activities I was going to undertake before I ordered our stock.

I would not hesitate to recommend Brainwaves and their product, they arrived promptly  and were well packaged. The products are eye-catching and well thought out. Please visit their website and get ordering!