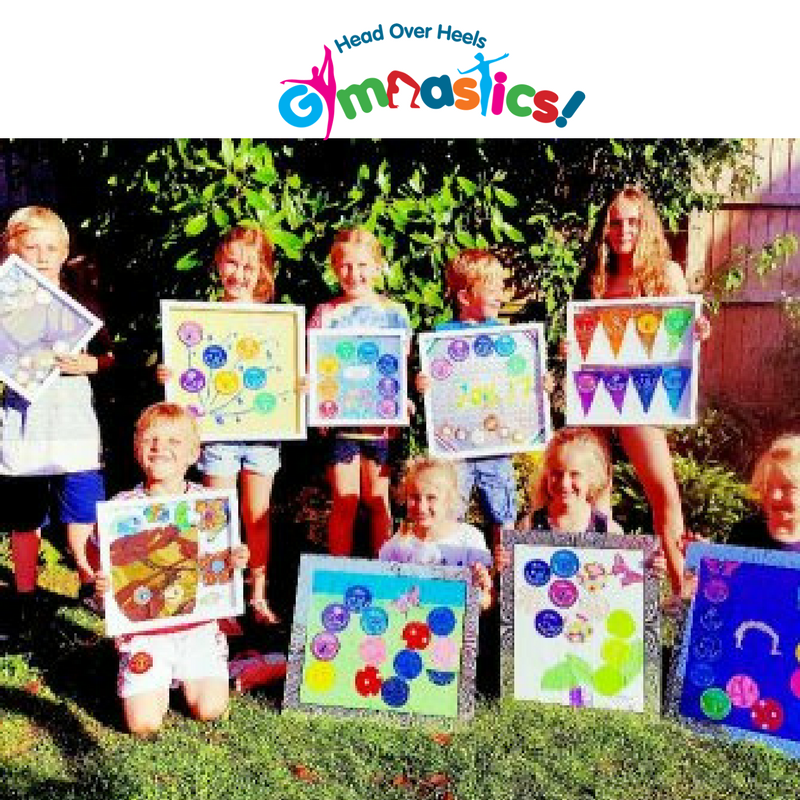 We recently came across the idea of framing gymnastics badges to hang from walls or stand on mantelpieces, and were inspired to give it a try ourselves. So, we visited our local scrap store for crafting supplies and organised a creative session to make mounted displays for the children’s achievements.

The badges that we use in the UK are part of the British Gymnastics Awards. They are designed for children to progress through a numbered system, beginning with level eight and moving through the numbers to level one. After these have been achieved, the gymnasts then have the opportunity to continue onto the bronze, silver and gold awards in various disciplines. Having numerous badges scattered around the house is part and parcel of British gymnastics, and seeing your child’s trail of accomplishments pinned in the hallway is far more pleasant than going on a literal trail from the top drawer in their bedroom to the pile of post on the counter where you’re sure one turned up the other day.

We assembled nine aspiring gymnasts for our crafting session, which, inevitably, meant that eighteen frames were bought (nine of each kind) to prevent the ‘best’ frames from disappearing into the more opportunistic hands. As it turned out, there wasn’t a clear winner: some of the children chose the deep frames, and some chose the metallic flat frames. There wasn’t a clear winner for us either, as both types worked well and looked equally effective. 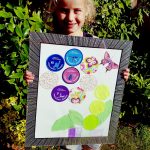 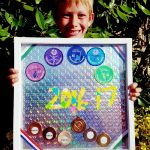 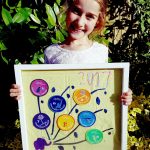 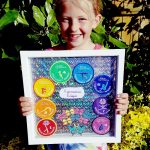 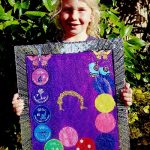 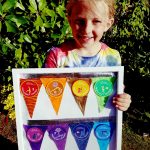 We allowed the children full reign to flex their creative muscles for the displays, and, almost immediately, they seemed to split into two trains of thought: they either wanted a geometrically patterned background, with the badges displayed in a uniform order, or they wanted a theme. The themes they came up with ranged from a caterpillar with a body of badges, to bunting, to a rainbow of badges, to a flower with badges for leaves, and even an elephant squirting the badges with water. Both trains of thought elicited some brilliant results, and in all cases the badges stood out in their frames.

Once the children had their ideas firmly fixed in their minds, we piled all the fabric, paper and ribbon we had bought onto the table for them to bring their thoughts to life. And thus ensued pure chaos. The children jumped at the task, cutting and gluing with the determination of those not wanting to forget a scrap of detail from their original concepts, with the adults struggling to provide enough hands to help with the fiddlier aspects. While PVA was more than adequate for most of the task, an adult armed with a hot glue gun was needed now and again for some of the more resistant fabrics.

After the decimation of craft materials was complete, all that was left to do was to fit the displays into their frames, and show the children their masterpieces. There was unanimous positivity when the finished products were revealed: each looked effective, and have surely made for great additions to whichever room they’ve found themselves in in their respective homes. My own three children were thrilled with their displays, and each instantly chose the perfect spot to hang their badges in their bedrooms. When the grandparents visited us at the weekend, they were escorted up to the children’s rooms to see the achievements which had recently taken pride of place on their walls.

This was a well-worthwhile activity. Not only did the children love the creativity and the craft, it also allowed the badges which they’d worked so hard to attain to be given the treatment they were due. I would highly recommend getting yourselves down to your local scrap store, digging out the glue from the back of the cupboard, and getting crafty!